A Primer On General Equilibrium, or Why Money Matters

This post is meant to be a short summary of how to think about macroeconomics in terms of general equilibrium. During my conversations with Michael Darda this past summer, it became painfully apparent that clients tend to struggle with how to put money and goods markets together. As a result, I thought I should put together a little piece on my basic approach to thinking through these kinds of "across market" effects, and why it matters for some of the policy debates of our day.

Any macroeconomy can be broken down into two main markets: a real market for current goods and services, and a financial market for claims on future goods and services. For brevity, I will reduce the model for financial assets to the market for money, which, because of money's role as a store of value and medium of exchange, captures the notion of "claims on goods". To simplify further, I take all the markets for goods and reduce them down to one composite market, say, for apples. From this caricature, we can start thinking about how markets fit together. 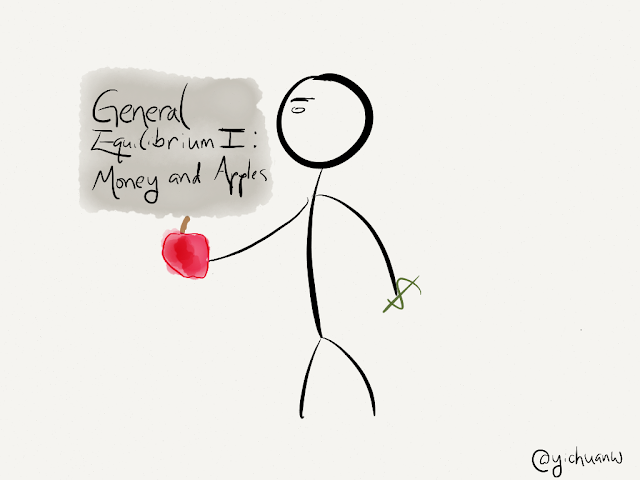 In normal times, people receive apples and money from the sky in the form of endowments (i.e. their wealth), and they make decisions about how to balance their cash and apple balances. Apples are transacted, bellies are filled, and life is good.

But suddenly, a recession hits. What does this look like? By definition, a recession is when there is a general glut of goods that aren't consumed. In this toy economy, this corresponds to a situation in which some people have apples but choose not to eat them! This may seem peculiar, but remember that the market for apples in this model represents a composite of all goods markets. So it could be the case that while everybody has apples, some want Red Delicious while others are looking for the tartness of Granny Smith. In more formal economic models, this is glibly incorporated by requiring that people do not consume their own endowment and instead trade for consumption. In any case, apples aren't eaten and we have a rotten general glut.

But this seems peculiar -- aren't markets supposed to clear? Not necessarily. Prices don't always adjust instantly, so we can have excess supplies and excess demands. However, economists do have a way to constrain what this non-clearing state looks like. In particular, according to Walras' law, assuming everybody spends all of their wealth, if there are excess supplies (i.e. too much produced) in some markets, then they must add up to excess demands (i.e. too little produced) in other markets. In other words, even if supply does not equal demand in each market, supplies must add up to demands across markets.

This leads to the most important conclusion from general equilibrium theory as related to monetary economics:

If there is an excess supply of goods, it must be the result of excess demand for money. 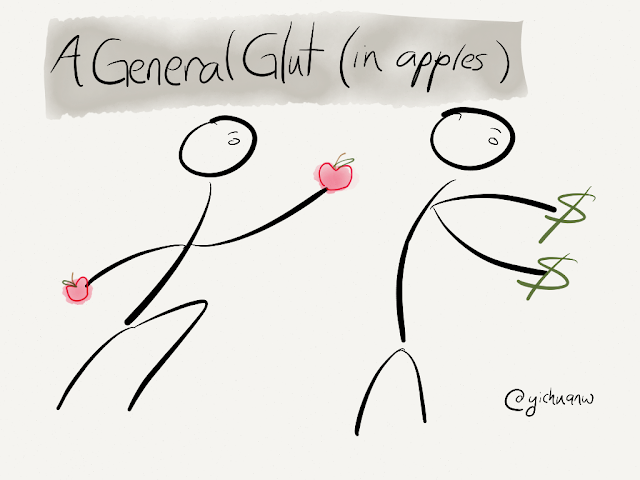 The goods market by itself is not enough to generate a recession with a general glut of goods. Only when there is the possibility of excess demand in money markets can recessions actually occur. Therefore the market for money is what gives a macroeconomy its business cycle feel. This is why money is so important for macro -- fluctuations in the money market are the proximate cause for any general fluctuation in the goods market. This is why, as Miles Kimball says, money is the "deep magic" of macro.

While this "apples and money" approach is the canonical presentation of general equilibrium, it is not the unique representation. For another interpretation, think about what the financial market really is. Since it represents the entire universe of claims on future goods, finance can be understood as a veil between the present and the future. So instead of focusing on the relationship between goods and financial markets at one point in time, we can cut out the middle man and instead think of general equilibrium as a sequence of goods markets that occur across multiple points in time. In this version, there is no financial market per se, but buying an apple in "tomorrow's goods market" represents buying a financial contract in the canonical model. Therefore, instead of thinking about the markets for goods and money, we can instead think about the markets for goods today and tomorrow. 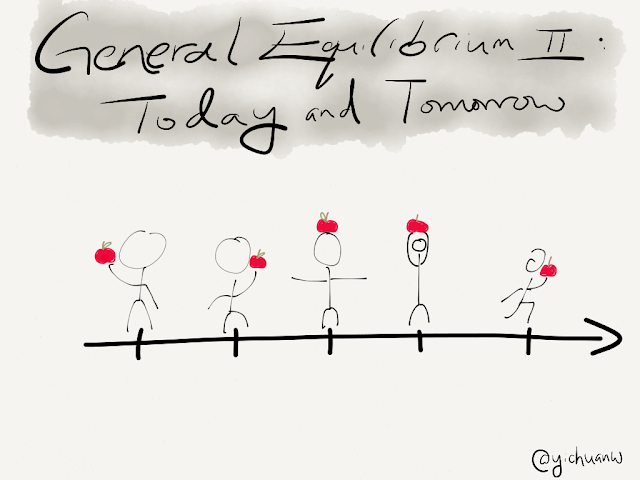 The same excess supply and demand relationship works in this model. If there is an excess supply of goods today, then it must mean that there's an excess demand for goods tomorrow. So in this version of the model, the reason apples aren't eaten today is because people want to wait and eat apples tomorrow. So we get a corollary to the above conclusion:

If there is an excess supply of goods today, it must be the result of an excess demand for goods tomorrow. 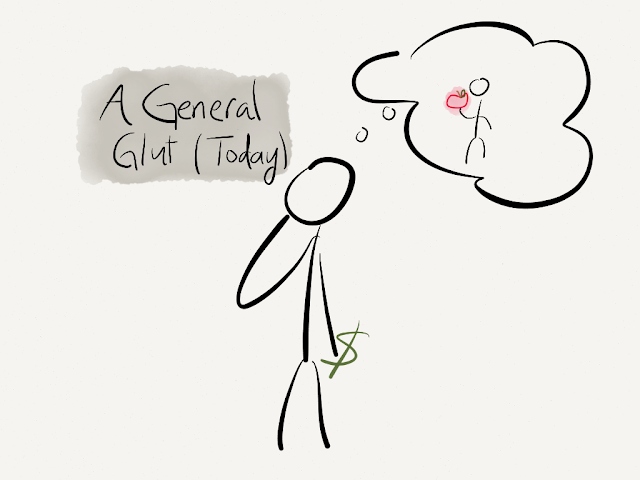 So if recessions are caused by an excess demand for goods tomorrow, how does policy fix a recession? Here, our microeconomic intuition will suffice. If we want to reduce excess demand for a good tomorrow, all we need to do is raise its price relative to today. And since the price of an apple tomorrow is just the amount of money I need to save to afford it tomorrow, lowering the rate of interest between today and tomorrow is sufficient to raise the relative price of tomorrow's apple and get me to consume today. Note that this has an analogue in the first "goods/money" story. By lowering the interest rate on financial assets (and expanding the supply of money), this makes financial assets less worthwhile to hold. People then pivot away towards the goods market, and the general glut is consumed.

If recessions are generated by this process, the interest rate story shows why monetary policy can be politically difficult. Monetary policy, in this model, just tries to change the relative price of consumption today and tomorrow to resolve the general glut. But just when people most want to save, the interest rate falls and it becomes more expensive to do so! This is part of the more general political difficulty of the price system. Under a price system, the most desired objects are the most expensive. While this may be unpleasant, it's certainly efficient and necessary for avoiding recessions.

Now, one question that arises is why the real rate of interest doesn't automatically equilibrate to solve these excess demand problems. This is actually a very good question, and is the reason why monetary economics is so important. The primary explanation is that the Federal Reserve may not move fast enough to provide enough money to serve as claims on tomorrow's goods, and therefor the real rate spikes when a crisis hits. This is why we invest so many resources into studying monetary economics, because it is the proximate cause of most recessions.

So here we close the loop. From a relatively simple model, we now have a theory of employment (apple recession), interest (relative prices), and money (in the canonical representation).

Now we get to the fun part -- applying this framework to some of the policy debates of the day.

Let's start with monetary policy. By visualizing a macroeconomy through a sequence of markets, it becomes apparent why forward guidance matters. Even if the interest rate for today is zero, future interest rates may not be. Therefore, by promising to hold rates low for an extended period of time, that makes future apples more expensive relative to current apples. Now, the exact adjustment path may not be ideal, but so as long as we lower the interest rate enough to create enough excess supply in the future, we will be able to restore demand today.

Interestingly enough, quantitative easing is not in this picture. However, that's a long conversation that will receive its own post in the future.

We can also think about fiscal policy in this framework. If a recession is just a sign that there's excess demand for goods tomorrow, then for fiscal policy to work, it must convince people to bring some of their future consumption into the present. The conventional old-Keynesian approach to this (i.e. the Intro macro approach), is to argue that by giving people more money today, that makes them want to consume more today, which then directly solves the recession. But the actual mechanism is more subtle, and the efficacy of fiscal policy is entirely determined by its effect on intertemporal choice.

The Ricardian critique of fiscal policy also pops out of this framework. Ricardian equivalence, roughly speaking, argues that since consumers will take the future costs of taxation into account, therefore fiscal policy will have little effect. In this model, this future cost of taxation means people don't reduce their excess demand for goods tomorrow. Because they know the government will take away those apples, the agents are trying to save up so as to have enough to eat when tomorrow comes. Therefore the whole Ricardian effects/positive multiplier debate again just comes down to whether fiscal policy is actually effective at changing the patterns of consuming today and tomorrow.

I'm not entirely satisfied with this model. In particular there are the glaring omissions of rigorous foundations for inflation or intertemporal production. However, I do think it does serve as a baseline for understanding why intertemporal choice is so important for understanding macro, and I hope to expand on it in future posts.

Pictures were drawn in Paper 53.
Posted by Yichuan Wang at 1:24 AM