When the Zero Bound Didn't Bind 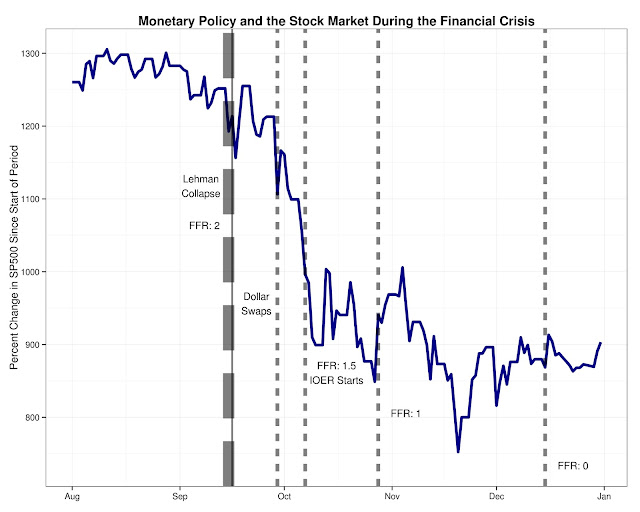 The zero lower bound didn't always bind. For three months after Lehman's collapse on September 15, 2008, the federal funds rate stayed above zero. In this period of time, the Fed managed to provide extensive dollar swaps for foreign central banks, institute a policy of interest on excess reserves, and kick off the first round of Quantitative Easing with $700 billion dollars of agency mortgage backed securities. Finally, on December 15, 2008, the Fed decided to lower the target federal funds rate to zero.

It is important to remember the sequence of these events. It is easy to think that the downward pressure on interest rates was the inevitable consequence of financial troubles. Yet the top graphic clearly contradicts this. Each of the dotted lines represents a FOMC meeting, and each of these meetings was an opportunity for monetary policy to fight back against the collapsing economy. The Fed's sluggishness to act is even more peculiar given that there were already serious concerns about economic distress in late 2007. As, the decision to wait three months to lower interest rates to zero was a conscious one, and one that helped to precipitate the single largest quarterly drop in nominal GDP in postwar history. The chaos in the markets did not cause monetary policy to lose control. Rather, the Fed's own monetary policy errors forced it up against the zero lower bound.

This is not to say those mistakes were purposeful. But in the high stakes game of central banking, even benign neglect can be dangerous. These failures in the last three months of 2008 can teach us many lessons about what should be done for future monetary policy. Only this way can we be more sure that careless mistakes won't jeopardize the future path of monetary policy.

One of the first steps would be to switch to a nominal GDP target. This would have two primary effects.

First, while this by itself is not a concrete instrument, it would be an important step in giving policy makers more freedom in responding to crises. Our current focus on inflation can cause particularly perverse outcomes when the economy comes under stress. During the September FOMC meeting right after the Lehman collapse and the Merill Lynch merger, in spite of the chaos in financial markets, the Fed chose to leave interest rates unchanged because of concerns about commodity price inflation. After such a long period of worrying economic conditions, the Fed choked because of a relative price change that was beyond the control of monetary policy to tame. A nominal GDP target would be robust to these kinds of shocks and better keep policy on track during the unfolding of a crisis.

Second, a nominal GDP target would also make policy after interest rates hit zero more credible.When the Fed is at the zero lower bound, one of the most important policy levers it has left is to adjust expectations of future interest rates. This is known as forward guidance, and is a consistent theme in the literature. In Krugman's original work on Japan's liquidity trap, he termed this kind of policy "credibly promising to be irresponsible". If this sounds peculiar, you are not alone. John Cochrane observes that

the key to stimulus when interest rates are zero is for the Fed to commit to keeping interest rates low, lower than than we and the Fed know it will want them to be when the time comes.

As a result, the Fed has a hard time committing to its forward guidance because it will want to renege in the future. However, if there were a nominal GDP target, this would remove the pressure to renege. In a sense, declaring a nominal GDP target changes perceptions of what the Fed wants.  By making policy systematic, and not discretionary, we can actually shape expectations and make the current policies of forward guidance and quantitative easing that much more effective.
Posted by Yichuan Wang at 9:51 AM